Varmr mostly resembles a pig with bright green fur. Varmr has a long snout, with a purple smile creeping up his face. He has two eyes, which are almost always droopy and have a relaxed expression. A long horn protrudes from his head. It's color scheme is much like a candy corn, going from orange to yellow to white. Varmr stands on four legs, his hind ones being a bit bigger than his front ones. He also has a small tail. The back of Varmr is made out of some strange, grey metal. It resembles that of a piggy bank. Various objects are on the sides of Varmr. They include: A top hat, sculpture of Striwor, A rubby red crescent moon, stitches, a Gamo plant, a lock, and a red mask.

Varmr is a very relaxed resident in Quatheral. He enjoys lounging around and sitting out on sunny days. He is more active in the night, and is very nice to the individuals. He isn't physically active much, but he's just a nice creature to watch television and to chat with. 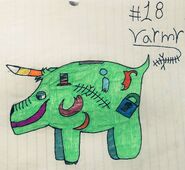 Varmr in Series 1
Add a photo to this gallery
Retrieved from "https://quatheral.fandom.com/wiki/Varmr?oldid=384"
Community content is available under CC-BY-SA unless otherwise noted.