Spicake mostly resembles a bright orange pterodactyl. He has purple stripes along the side of his head, and has small purple legs. He has several, small white eyes scattered around his body, each with their own expression. Spicake is always wearing his shades. No matter what.

Spicake is an over exaggerated bully character you would see on children's tv shows. He constantly makes fun of other members appearances, and always says how cool he looks. Because of this, Spicake doesn't have many friends, and usually stays in his house. He is usually mocked by the some of the aggressive members of Quatheral stand up against him. Spicake is flustered easily whenever someone makes fun of his shades and how he never shows his real eyes.

Spicake runs a blog named "How 2 stay cool!" It has no followers. 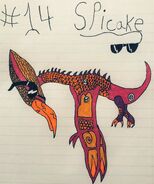 Spicake's Series 1 appearance
Add a photo to this gallery
Retrieved from "https://quatheral.fandom.com/wiki/Spicake?oldid=294"
Community content is available under CC-BY-SA unless otherwise noted.