Seor is a small little green creature, with an octagon-like form. Seor has 5 eyes in total on the front of his body, each one entirely different from the other. This plucky fellow also lacks a mouth, but can still speak just fine. Seor also has various red-pink, pink and blue patterns scattered throughout his entire body. Seor also has two shoes on his feet, which are constantly shining to their full potential. 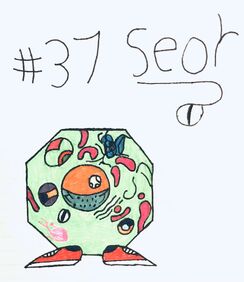 Seor's favorite thing in the whole of Quatheral is to make stupid puns about eyes and shoes. Nearly every sentence he says is a pun. 90% of the time it's about something eye related. Besides that, he likes to read joke books in his spare time.

Seor runs a shoe shop in Quatheral. It's not very successful, but Seor is still happy about it. 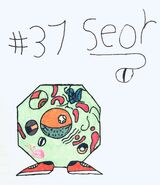 Seor's Appearance in Series 1
Community content is available under CC-BY-SA unless otherwise noted.