Rauna mostly resembles an elephant with a few differences. She has a longer and more rounded tail than an elephant. Red and purple scales wrap around her large tail. These scales, along with pink scales run along her back, legs, belly, and trunk. Her trunk is slightly smaller than a normal elephant as well. She has white fur along her body and legs. Sometimes, she has mud around her hooves and trunk. Rauna also has long eyelashes.

She is an aggressive monster in Quatheral. She never wants to be seen with any other creature other than her fellow band members. She constantly has to remind herself to restrain from hurting the other residents when they get on her nerves. However, she acts like the polar opposite whenever she's around her friends. Especially Ybi

Rauna is one of the band member in the band called "7:05 East" She plays the instrument called "Zocinus Liver" that has two holes that she's able to place her hooves in. Several pipes stick out from the front of the instrument. Two tubes also wrap around the instrument. 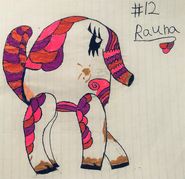 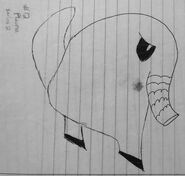