Moua's skin is primarily a very pale yellow color, and has a dark green on the back and sides of his lower tail. He has over 25 eyes at the center of his head. He also has large black lips. Moua also has two arms, with three fingers on each hand. Moua also has a small fleshy antenna on the top of his head that glows a dark green in dark areas. 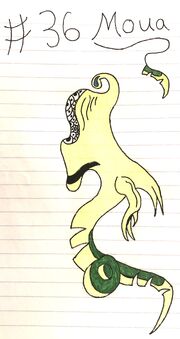 Moua likes to spend time with others, but is very soft spoken, and doesn't like talk over the group. He's the type of guy who you can ramble to, and he's perfectly fine with that. Has a intense fear of people staring at him for too long and gets anxious when giving speeches.

Moua doesn't have a true job, but he does often write fairy tales. He uses them to spread tales around Quatheral, just because he thinks it's cool that he can add mysteries to Quatheral. However, some of those tales are based in truth, even if he may not know it.

Moua's Series 1 Appearance
Add a photo to this gallery
Retrieved from "https://quatheral.fandom.com/wiki/Moua?oldid=418"
Community content is available under CC-BY-SA unless otherwise noted.