Megnic is a very blocky robotic being. Megnic's head is a silver color, and has two average rectangular holes near the top of his head that act as his eyes. He also has a small square hole in the middle of his face which resembles a nose, and a large circular hole which he can speak from. Megnic has a large smooth body, painted a bright orange. On the front of the body, Megnic has a green painted triangle. Along the sides of his body has several red glowing dots, which constantly fade in and out. He has two dark green arms, which end in three thin fingers. Similar to his arms, he also has two dark green tubes that go from his lower body to his upper body. Megnic has two green striped legs which end in a sharp point. Finally, the back end of Megnic have various green patterns on it. 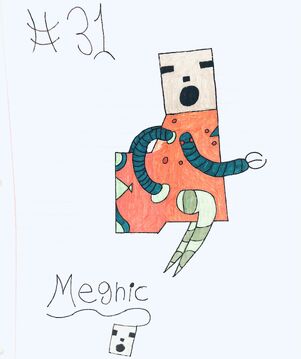 This generator robot is very much tech savvy. He speaks in a constant montone voice, but he likes to think of himself as a party animal, even though he isn't. Megnic is also very slow moving also, due to how heavy his backside is, and that he doesn't have strong legs. He likes to talk about construction, though he had no idea how to actually execute it.

Megnic with with Migue in a weird combination business. They help with problems with power, repair and construction. Megnic is the one who runs most of the power related issues. 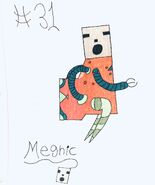 Megnic in Series 1
Add a photo to this gallery
Retrieved from "https://quatheral.fandom.com/wiki/Megnic?oldid=378"
Community content is available under CC-BY-SA unless otherwise noted.