Maacre mostly resembles a blue balloon type monster. She has two big eyes, with long eyelashes. She also has a big mouth, with two sharp snaggleteeth right next to each other. She has blue and dark blue blotchy rubbery skin. Maacre also has a small piece of "hair" on the top of her head. She has quite a thin body, and has the ability to float. She has two thin arms, which are connected to two thin arms connected to two thin fingers.

Acre has a slightly similar shape to Maacre, that being mostly a round shape. Like Maacre, he has the same piece of hair that sticks up and goes over the left side of his head. Most of if not all of Acre's body is covered by his purple hair. Only his two eyes, and pink, three fingered hands. Not seen however, is his two toed feet. 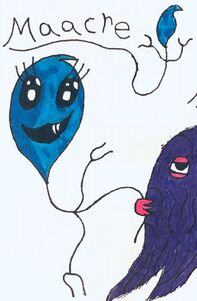 Maacre is 100% an airhead. She has no idea what she's doing, where she is, or how she's doing it, but she's certainly is trying her best! She's a bit like Dodorack in a way. What sets her apart from Dodorack however, is how she is more receptive to other Quatheral beings, and can actually go off on her own unlike Dodorack who seeks Dorack's attention. She's often awestruck whenever someone tells her about their hobbies. She'll often try out these hobbies for herself, but usually gets either bored of them or fail in such a spectacular way that she's embarrassed to try it again. Not all of them are failures however!

Acre is much more toned down than his buddy, and mostly just wants to stay home and take a nap. Acre doesn't say much, and just mostly mumbles out words like "Mmmhmm." and "Hrmm." However, when he does talk in words, they're usually about how he's tired. Despite this, he'll tell Maacre what shows he watched on the TV, whilst also listening what stories Maacre has. On the few times Maacre had gone back home crying, Acre will try to console her and try to make her feel better. He'll even get out of the house the next day and go out on a walk with her. 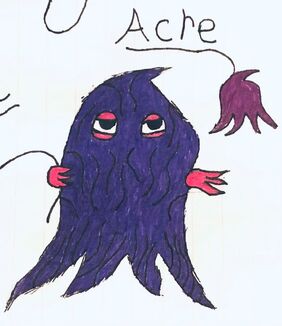 Maacre currently has a job as a mailer and giving small Quatheral beings rides across Quatheral.

Acre sits at home and watches TV for a job. What a freeloader. 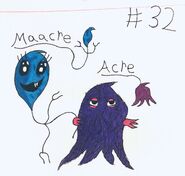 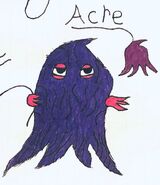 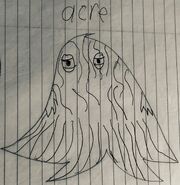 Acre in Series 1
Add a photo to this gallery
Retrieved from "https://quatheral.fandom.com/wiki/Maacre_%26_Acre?oldid=382"
Community content is available under CC-BY-SA unless otherwise noted.