Lonpe is a large quadruped being, mostly being sangria colored on his body. They have three, sharp claws on each foot. Along the back of Lonpe, a large metal cylinder pokes out, and a large flame erupts from it, much like a candle. Lonepe has secondary "shoulders" as well. On the his left, it is primarily colored pink and on the right is is mostly colored a light green. They have three deep red triangle patterns on each side. Along the sides of Lonpe's neck, is a bright orange air sack, which helps him keep afloat while swimming. Attached to the bottom of it had two small red hooks. Lonpe's face round, and had a lime green skin color. He has two eyes, and two teeth the occasionally stick out from his mouth. 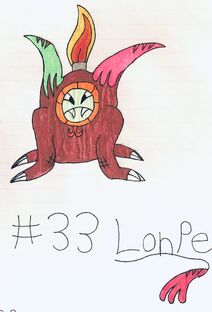 Lonpe has a great interest a fire, in which he is immune to. Lonpe always tried to feed himself wood to make the fire on his back greater. He tries to get others to join him in enjoying fire, even if they can get burned. He also has a bit a poor eyesight, and needs glasses but refuses to get ones. His best friend is Fircol.

Lonpe in Series 1
Community content is available under CC-BY-SA unless otherwise noted.
Advertisement