Jagher is like a strange combination of a bird and a slug. They are colored primarily blue, with more of a darker shade of blue the more it reaches to their tail. Jagher's belly has a bright orange shine to it, along with a weird bony structure that juts out to form the letter "V". Jagher has a long yellow beak, and two rosy cheeks. Jagher also has two big floppy arms with three fingers each. On each side of Jagher's tail, they have a large bowtie, with one of their eyes at the base of it. Jagher has various eyes along the sides of his body, with 17 eye in total. 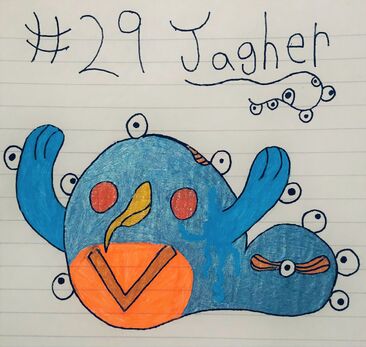 Jagher is a very loud and obnoxious individual. They have no indoor voice at all, which leads them to be shouting all the time. Jagher is also very touchy, grabbing hold of any being that's near him for comfort. They do however have an appreciation for fashion, and even decorates himself in bow ties and ribbons from time to time. 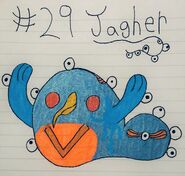 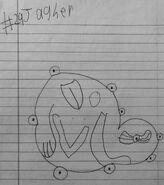 Jagher in Series 1
Add a photo to this gallery
Retrieved from "https://quatheral.fandom.com/wiki/Jagher?oldid=385"
Community content is available under CC-BY-SA unless otherwise noted.