Haless mostly resembles a thick cloud. He has a black eye patch on his right eye, that goes into his white hair. He almost always has a toothy grin, which showcases his few golden teeth. He has a few Green bugs inside and outside of his body called Hale's, which are an extension of Haless. The Hale's have four legs, two tails and a pair of antennas. They have a single eye on the back of their bodies.

Haless is very much like a pirate, like his appearance. Haless almost always has a smile on his face, excited to just be sailing with his friends. He is a bit rude, but tries to be his kindest to his crew. He's also a bit reckless trying to claim some pirate treasure for himself. He loves to claim prizes as his own, and share it around with the rest of his crew.

Being a pirate, i'd be pretty much what you'd expect. Haless goes around finding treasure, singing shanties with his crew, taking care of his cloud ship, and drinking Exaa liquid. If there is no treasure to be found, he will instead create his own treasure, by stealing precious objects from Quatheral residents. 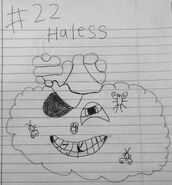 Haless in Series 1
Add a photo to this gallery
Retrieved from "https://quatheral.fandom.com/wiki/Haless?oldid=332"
Community content is available under CC-BY-SA unless otherwise noted.