Gizal is a very small rodent creature, not even standing at a foot tall. They have two heads, each on the opposite sides of eachother. They are exactly symmetrical as well. Gizal has primarily red fur, with two brown rings of fur on their back which makes it look they have a target on their back. They have two small eyes and ears on each of their heads. Gizal's legs are mostly colored a bright green on the front of their legs, and the back of them are a bit of a darker hue. Also to note, Gizal has "wings" similar to a flying squirrel. 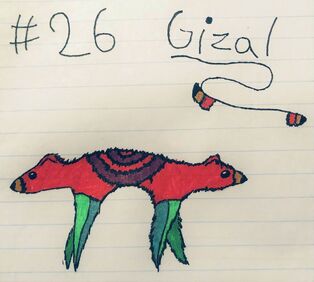 Gizal is plucky individual, well the two of them. Sort of. Despite them having two heads and technically two different minds, they aren't aware that the other head exists. They truly think they only have one head, They just think they want to walk backwards sometimes; but in reality the other one is just walking forwards. Whenever another Quatheral being tells them they have two heads, they refuse to believe it, no matter how many times they're told. Even when shown using a mirror, Gizal will blame the mirror saying it's a fake. Their passion is cooking food, and will collect exotic fruits and meats that they find on their hunts. Though sometimes, they find that some of their food has been nibbled on, unaware of the other head who took a quick bite.

Gizal occasionally hosts cooking competitions, and will give tips on how to cook certain types of foods. 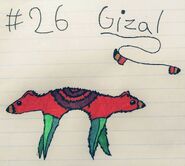 Gizal in Series 1
Add a photo to this gallery
Retrieved from "https://quatheral.fandom.com/wiki/Gizal?oldid=383"
Community content is available under CC-BY-SA unless otherwise noted.