Galu is humanoid in shape, with purple and pink skin. His arms and legs are a deep blue, with his legs ending in a single tendril. His arms however, end in two fingers. Galu's mostly purple skin is interpreted by pink patterns wrapping around his body. He has a small orange nose. Galu also has two different kinds of eyes, with his right one being orange, while his left is a dark blue. He wears glasses, with the lenses being different as well. He has 4 blue tendrils ontop of his head that act like his hair.

Galu is very pretentious, and feels like he needs to give his opinion on everything. He tries to butt into conversations and say his opinion is correct, even if he has zero idea on what the subject actually is. He gets overtly offended when someone speak about his glasses in a negative fashion. He does take interest in star gazing, and spends a few hours just watching the stars.

Galu runs a small shop that sells computers. It is called "Shallow Fallow" 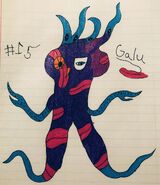 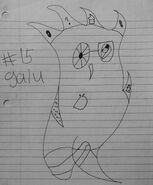 Galu's Series 1 appearance
Add a photo to this gallery
Retrieved from "https://quatheral.fandom.com/wiki/Galu?oldid=298"
Community content is available under CC-BY-SA unless otherwise noted.