Ebbrv is a small, green blob-like monsters, He has a small slug-like tail, that leaves a bit of a slime trail wherever they go. He has a large, singular eye at the top of his body. Ebbrv also has two, small arms on the sides of his slimy body. Ebbrv also has a small mouth, with a tongue that sticks out occasionally Inside it's body, small red and white cylindrical organs are seen floating about in it.

Ebbrv is quite clueless about everything in life, often finding himself in situations quite often. Too bad he doesn't even realize that he's in trouble in the first place! Luckily his slimy body is able to withstand most of the damage he takes. Ebbrv is always happy about everything he is able to see and feel.

Ebbrv watches over a blue, rubber ball. The others tell Ebbrv to watch it not because it's important or holds any power, but because if Ebbrv constantly reduces the chances to find himself into danger. 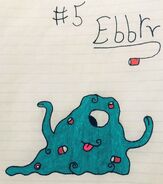 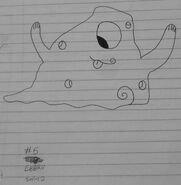 Ebbrv in Series 1
Add a photo to this gallery
Retrieved from "https://quatheral.fandom.com/wiki/Ebbrv?oldid=254"
Community content is available under CC-BY-SA unless otherwise noted.