None (Left Eye) Black (Right Eye)
Dordog is a small, orange being. Dordog's is a strange type of skull, with various cracks from previous damage. He has a stitched mouth that is able to express itself, much like Cthelee's. Dordog only had one eye, which is on the right side of her face. On the left side, his eye socket occasionally leaks a black liquid, along with the few holes in his face. Dordog's body is strange as well, having thin body. So thin that you can see her ribs just under his thin flesh. Dordog has no arms or legs. Dordog has a tail that has been cut off and has been sealed over with some sort of glue. He is always levitating.

Dordog is always a fun resident to be around. He likes to hang around on the beaches of Quatheral, playing with anyone that stops by. He is short sighted however, and always needs to turn his body just to see the creature she is talking to.

Dordog watches over the beaches, and makes sure to keep everyone there out of harms way. He acts very much like a lifeguard, and helps build sand sculptures for the residents. 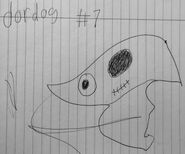 Dordog in Series 1
Add a photo to this gallery
Retrieved from "https://quatheral.fandom.com/wiki/Dordog?oldid=265"
Community content is available under CC-BY-SA unless otherwise noted.