Black
Dorack is a small brown creature, standing on four hooves. He has two sensors on top of his head with bright orange tips that he is able to move around a tiny bit. Small black eyes appear on the each of these sensors. He has large ears on the back of his body. He has a dirty yellow nasal horn on the front of his face.

Dodorack differs slightly from her counterpart. She is roughly the same size of Dorack and colored green. Dodorack has the same type of sensors on top of her head. She lacks ears, but her sensors act as her ears instead. Her sensors however different on each side. Her left side is the same as Dorack's with a bright pink tip to it. Her right sensor however, is a dark blue, and sharper and less rounded than the other one. On the back of her body, she has a flower-like ball. This red, orange, yellow and pink organ can open up and secrete a sweet scent.

Dorack is VERY protective of Dodorack, trying to fend off any creature that is near her. If Dodorack is nowhere near him, he becomes very panicked and tries to look for her when this happens, often becoming irritable to the other residents. Due to both their sensors, they are able to communicate to each other telepathically. Dorack with his companion cuddles with her any chance he gets. He especially loves the scent Dodorack emits when he finally finds her.

Dodorack likes to tease her companion when in front of other members of Quatheral, though he's too busy loving her to notice most of the time. She often runs away from Dorack, playing her own game of hide and seek, and patiently waits for him to come and find her. She's also a bit over dramatic. She always releases her scent when Dorack finds her to reward him.

The two don't have a real job at the island. 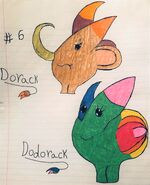 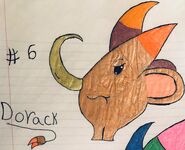 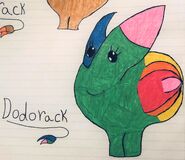 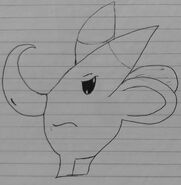 Dorack in Series 1
Community content is available under CC-BY-SA unless otherwise noted.
Advertisement