Cthelee was the first ever monster created in the Quatheral series. He was first conceived in late 2014 in a middle school class. When one of MinorBone Good's friends randomly decided to fold a post it note and gave it to MinorBone. Also bored, he decided to draw on it, making it into a creature. MinorBone later named it Cthelee, trying to make the name sound like a 'cutesy' version of the name Cthulhu. Later that day, another friend of his took notice of the small being, and began to draw it on a piece of lined paper with pencil to form the head. Minorbone, ecstatic that a crude monster he made was remade into a much more elegant creation. This first drawing would eventually be included in Series 1, being the first ever drawing. MinorBone returned to the friend who made the post it note the next day, asking them to make more, and gave them two post it notes. They attempted to do so, but failed, causing the creation of a botched Cthelee, and a paper airplane. These two would later become Angear and Gearan.

Cthelee is a feathered, tall, black striped being, resembling a mixture of something between a horse and a duck. He stands upon two legs, with pointed tips to his feet. Cthelee lacks a tail and instead having a rounded end. Atop his head, there is messy gray hair which can never seem to be straightened out, White/light gray is the primary color for it’s feathers and nearly all of Cthelee's feathers have at least 3 thin black lines resembling stripes. Just under the neck, lay a pair of wings which share a similarity of a flamingo's. Cthelee has what looks to be a stitched mouth on the front of the body. This "mouth" can move around to express his emotions. Despite this, this is not Cthelee’s actual mouth. Instead, it lies in its thick neck. When Cthelee is ready to eat or need to hold an object, Cthelee’s neck skin can unravel in a spiral pattern. Around 50 dark blue 1 inch tubes slowly come out of the exposed skin. These tubes can stretch up to 3 feet.

Cthelee is an extremely shy and nervous creature, often using it's wings to hide it's eyesight from anything threatening. Living or not. Though it does not display this to his fellow Quatheral monsters as much, but the sense of nervousness is still there. When threatened, it will attempt to try to block its own sight with its gigantic wings and try to back away from the offending object. In even extreme cases, Cthelee will run the direct opposite direction the being is facing. Cthelee is very passionate about the friends he has, even sometimes getting up the courage to stand up for them. Cthelee is slowly starting to gain his confidence, and is beginning to branch out and explore more areas around Quatheral. Cthelee almost never expresses any anger towards anything, instead just deciding to put on a nervous expression. Cthelee is extremely nice towards his fellow creatures, and is willing to try to overcome his fears.

Cthelee is more of a free roamer in Quatheral, going wherever he wants or where he is needed by others. He often plays and cheers up the younger Quatheral's on the island, helping them in any way he can. When alone, he tends to swim in the pond right next to his little hut of a house. 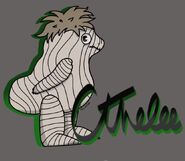 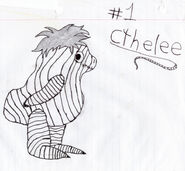