Edit
watch 01:36
We're Getting Mutants in the MCU - The Loop
Do you like this video?
Play Sound

Cider mostly resembles a common rabbit, but with sharp crystals replacing their skin. Like a rabbit's, she has two feet, two arms, two long ears and two eyes. Unlike the rest of her body, her eyes actually have black crystals, unlike the rest which are mostly white. Cider's head probably has the most crystals out of anywhere on her form. Her body is sort of blocky, and it probably the smoothest surface in her entire form. Along her back, there are slightly longer crystals, that shimmer with a radiant color. The same goes for her tail. 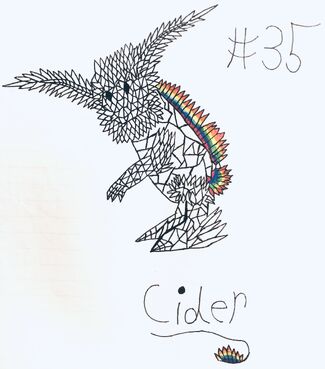 Cider is a scrappy fighter, it was like it was made for her. She loves to get into arguments and roughhousing, and often is found getting into situations she shouldn't be in. She does mean well however, and isn't just beating up random Quatheral citizens on the streets. She's a bit sassy, and will make sarcastic comments if something annoys her. She doesn't like to obey rules either, and likes to prove anyone wrong that says she can't do something. Despite all this, Cider does like to pretty, and tries to keep her home as tidy as possible.

Cider has no true occupation on Quatheral. However, she does help out if something needs to dig a tunnel for whatever reason. 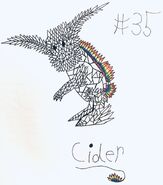